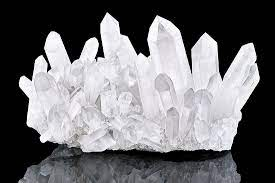 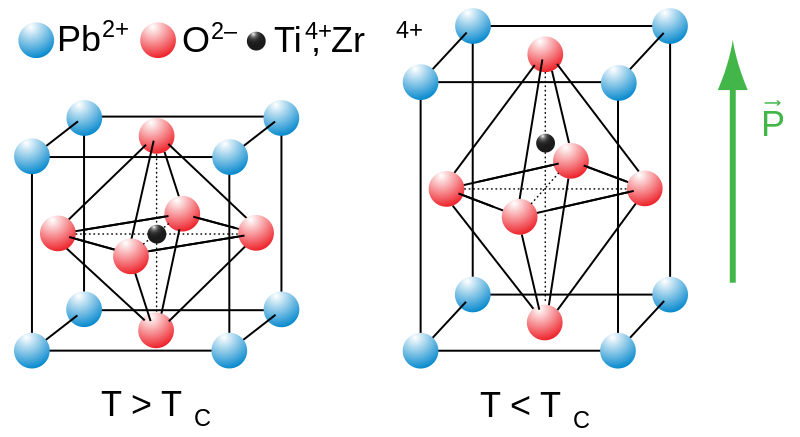 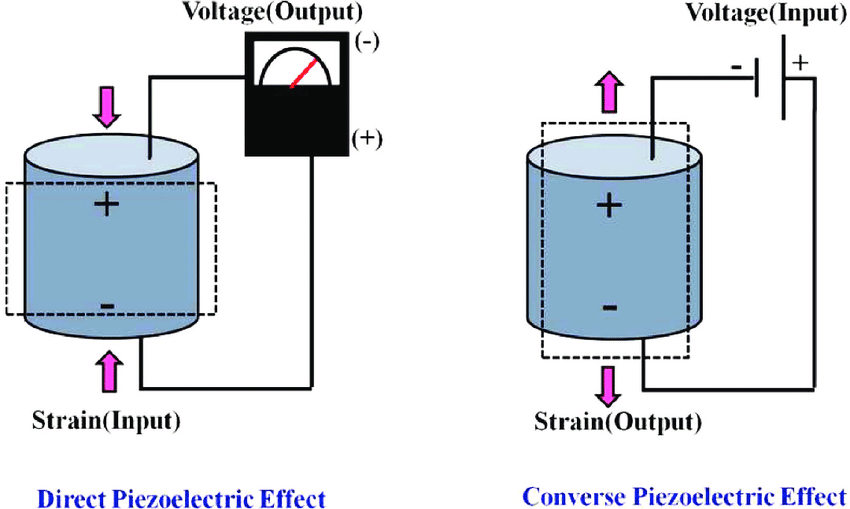 When mechanical stress or friction is applied to these materials, the atomic structure of the crystal’s geometry changes as a result of the net movement of positive and negative ions with respect to one another, producing an electric dipole or polarisation. As a result, the crystal transforms from a dielectric to a charged substance. The amount of stress or tension placed on the crystal determines how much voltage is produced in a direct proportion.

When electricity is applied to these crystals electric dipoles appear, forming the dipole movement which causes deformation of the crystal, thus giving rise to converse piezoelectric effect as shown in the figure.

WHY PIEZOELECTRIC MATERIALS ARE IMPORTANT SO?

PROPERTY OF THE MATERIAL

The peculiar atomic structure of piezoelectric materials is the key to their effectiveness. Positive and negative ions are found in pairs, or unit cells, in piezoelectric materials that are ionically linked. These substances can be found in nature as an anisotropic dielectric with a non-Centrosymmetric crystal lattice, which means that the ions do not have any free electrical charges

1. Crystal Oscillators:The stability of the oscillatory system will be controlled by the constancy of the elastic constants of the crystal. Especially cut quartz disks are generally used for this purpose, the stability being particularly high since the coefficient of thermal expansion of quartz is very low. The use of quartz crystal oscillators in electronic circuitry is already very great.

3. Medical Ultrasound Applications:Piezoelectric material can be used for both active and passive transducer applications

The most important and difficult challenge for meeting energy demands is researching sustainable, dependable, and ecologically acceptable energy sources. Energy may be continuously gathered and stored to power such sensors by using supercapacitors. Because of these special characteristics, the supercapacitor is a primary battery substitute that is more effective (fast charging rate, fast discharging rate, and high power density). To create such a supercapacitor, we need mechanical energy sources including piezoelectric, triboelectric, and electromagnetic energy, which are mostly derived from human activities and environmental occurrences in vibration form. A self-charging supercapacitor can be used with a more promising energy source called the piezoelectric effect. These substances can convert any sort of random free energy into electrical energy. To increase the viability of self-charging capacitors for commercial applications, a variety of materials based on piezoelectricity can be utilised. For the creation of piezo-self charging supercapacitors, many inorganic and organic piezoelectric materials are tested. For self-charging piezoelectric supercapacitors, inorganic materials with high piezoelectric constant, high permittivity, and ferroelectric properties—such as lead zirconate titanate (PZT), barium titanate (BaTiO3), and zinc oxide (ZnO)—are typically employed (SCPSCs).

Similar to PVDF, poly (vinylidene fluoride-trifluoroethylene) (P(VDF-TrFE))[34], and polydimethylsiloxane (PDMS)[35], some organic materials are extensively investigated in piezo-self charging devices due to their increased flexibility and superior piezoelectric performance when compared to the inorganic materials.

Researchers are attempting to overcome a number of obstacles in the field of piezoelectric material science, though. Several of these difficulties include:

2.  Increasing the longevity and stability of piezoelectric materials is a difficulty because these materials can deteriorate over time as a result of mechanical wear and exposure to high temperatures, among other things.

5. Finding novel piezoelectric materials that have special features and can be employed in a range of applications represents another difficulty.

The prospect of using nano-fibre piezo materials as a source of electricity on a commercial scale is intriguing.

Using piezoelectricity to power a car is a remarkable invention by industrial designer Jung-Hoon Kim. The vibrations produced when the car is moving are used to power the piezoelectric devices that recharge the batteries. This concept is crucial because it doesn’t use fossil fuels and produces no emissions.

Paul Frigout, another industrial designer, created a self-recharging cell phone! It is referred to as the Zeri phone and employs thermoelectric and piezoelectric technology. The former generates charge via temperature variations, whereas the latter does it using air vibrations. The smart phone is completely ecologically friendly thanks to these two capabilities.

Alberto Villarreal, a Mexican, created a pair of shoes with built-in lighting. The electroluminescent polymers included in the shoes can generate light by utilising the kinetic energy from walking or running. These outcomes provide nighttime runners with protection.

The tablet industry is home to the following cutting-edge technology. Regenerative input on a touch screen might end up being the primary method for powering these well-liked devices. The typical person pushes their touch screen 1000 times every day, according to statistics. This will more than adequately power the tablet.

The piezoelectric shower is the last device and arguably the most intriguing piezoelectric device. The shower was created by Finnish, Mexican, and German engineers and contains several small nanowires. These nanowires generate electricity from the energy of the moving water in the shower, which is then used to heat the water through a heating element. Additionally, the shower incorporates touch panels that track the user’s time in the shower as well as the amount of water consumed. There is also a regulator feature that keeps track of the water pressure.

There are several simulation techniques that can be used to model the behavior of piezoelectric materials. Some of the most common include:

It’s worth noting that the choice of simulation technique will depend on the specific application and the level of detail required in the simulation.

We offer some courses related to similar topics

If you want a discounted coupon or if you want to know more about the course. Feel free to contact us